News of change in Police Pursuit Policy in Devon & Cornwall Police. I do Pray and hope that they will do more to look after the poor suicidal driver!
http://www.independent.ie/irish-news/uk-police-alter-pursuit-tactics-days-after-plea-by-irish-woman-29882046.html
http://www.independent.ie/irish-news/mother-who-lost-family-in-police-chase-welcomes-uk-changes-29884544.html

January 2014
Following news on Jan 1st someone mentioned to me had I ever looked into what goes on with Gardaí here, so I started to research Garda Training to deal with the suicidal driver or the one who is known or suspected to be suicidal.
I approached different members of the Dáil and suicide support groups to outline my concerns and request their support on this. Several members of the Dáil and Senate have come on board lobbying questions to the Minister on my behalf which I really appreciate. I have also received great help and support in this, from Inspire Ireland, Suicide Aware in Cork, 3T’s in Dublin and Pieta House.
http://randomirishnews.wordpress.com/2014/01/06/growing-support-among-tds-for-elber-twomeys-campaign-to-ensure-gardai-trained-in-how-to-pursue-suicidal-drivers/

February 15th 2014
I had a meeting with Minister for Transport Leo Varadkar thanks to Michael Creed TD.
At this meeting I outlined my concerns to the Minister.
http://randomirishnews.wordpress.com/2014/02/17/leo-varadkar-to-push-for-elber-twomey-campaign-push-for-suicidal-driver-pursuit-training-review-of-gardai-procedures/
http://www.independent.ie/irish-news/suicide-crash-widows-campaign-to-boost-road-safety-gets-support-from-varadkar-30015440.html

March 22nd 2014
I addressed the Fianna Fáil Party Ard Fhéis thanks to help from Suicide Aware in Cork, Niall Collins TD and Michael Moynihan TD.
At the Árd Fhéis the motion was carried recognising the need for all Gardaí to receive specific training on how to deal with suicidal drivers and to deal with the one who is known or suspected to be suicidal.
http://www.independent.ie/irish-news/tribute-for-mum-who-lost-family-to-suicide-driver-30118816.html
http://www.eveningecho.ie/2014/03/24/mums-appeal-train-gardai-deal-suicidal-drivers/

April 9th
Fantastic to see that I am not the only person who is talking about the need for All Gardaí to receive training to deal with the suicidal soul. Let’s hope they do and that they go further and include the suicidal driver.

‘Widespread lack of training’ among gardaí in dealing with suicidal people (via @thejournal_ie) http://t.co/2TDk5rEiMq

May 8th
I was honoured to be with Suicide Aware Cork as they launched their fantastic Amber Flag nationally today. What wonderful work they do. Well done to all involved. 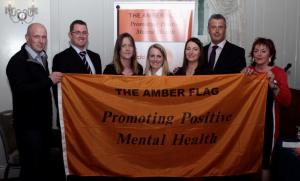 May 14th
I contacted the Joint Oireachtas Committee on Transport and Communications on May 7th, to request the support of the Committee that all Gardaí be trained to cope with a suspected suicidal driver or a person who is known or suspected to have suicidal ideation while driving a vehicle.
My correspondence was considered by the Committee at its meeting of 14 May where it was agreed to write to An Garda Siochana expressing its strong support for my request.

May 15th
I contacted the Joint Oireachtas Committee on Justice & Defence on May 7th, to request the support of the Committee that all Gardaí be trained to cope with a suspected suicidal driver or a person who is known or suspected to have suicidal ideation.
My correspondence was considered by the committee at its meeting on 15th May. All members fully supported my call for all members of An Garda Siochana to receive training on how to deal with suicidal drivers or those suspected to have suicidal ideation.
In this regard the Committee agreed to forward my correspondence to The Minister for Justice and Equality and the Garda Commissioner requesting that they give my proposal urgent consideration.
http://www.irishexaminer.com/ireland/tds-back-elberrsquos-call-for-garda-training-to-deal-with-suicide-269355.html
June 3rd
Unreal important meeting in Dublin to do with my Mission.
Really Believe we will see training in Suicide Awareness/Prevention for all Our Gardaí Please God!

June 6-8th Our Weekend in Honour of My Beauties
Extremely Emotional but Truly Wonderful Weekend, just as My Beauties Deserve.

Few Highlights of @TwomeyWeekend Opening Night Our Wkd in Honour of My Beauties 🙂 #SoundCloud #twomeyfamilyremorial https://t.co/pIuk6yKeY1

Hurling Legends @tomas_mulcahy & Justin McCarthy Opened Our @TwomeyWeekend Our Weekend In Honour of My Beauties 🙂 https://t.co/JAku5iIztV

June 19-26th
My First Trip to visit Our Lady of Fatima, Wow! Will definitely be back Please God 🙂

July 23rd
Meeting with Minister for Justice Frances Fitzgerald,
A Big Thanks to Áine Collins TD who arranged the meeting and to Dan Neville TD who attended the meeting with my brother Tomás and I.
Great to hear the Minister’s words “I am supporting your visit to Templemore as the Minister for Justice and I am supporting your call for training in Mental Health issues. I will be in touch with the Gardaí about it”.